Jewish Power is the ability to get us to stop talking about Jewish Power. Gilad Atzmon.

Mordecai Vanunu told us Israel killed President Kennedy because he opposed their nuclear weapons program. If anyone but Israel had organized the assassination of President Kennedy, America would have crucified the man who ordered the presidential Secret Service detail to leave their posts. In fact Americans allowed the Jewish controlled media to lie to them about Arlen Specter’s Magic Bullet and also about the Zapruder film. And we even allowed Gerald Posner to peddle his book Case Closed saying that Oswald did it all by himself. And four year later in 1968 we convicted a Palestinian for shooting Robert Kennedy in the back even though he was standing in front of JFK’s younger brother. That is Real Jewish Power.

A U.S. Marine CH-46 Sea Knight helicopter comes down in flames after being hit by enemy ground fire during Operation Hastings, just south of the Demilitarized Zone between North and South Vietnam on July 15, 1966. The helicopter crashed and exploded on a hill, killing one crewman and 12 Marines. Three crewman escaped with serious burns. (AP Photo/Horst Faas)

His Majesty’s Jewish Government fought two Opium Wars against the Chinese people (1839-1842 and 1856-1860). Today the Too Big To Jail Banks launder a trillion dollars a year in illegal weapons and drug money with these consequences for Gentiles.

This woman just identified the body of her 16 year-old son who was shot in front of their home. He was one of 8 people killed and 43 wounded over the previous weekend. 100,000 people a year die from heroin overdoses but many more are killed by drug gangs. Court documents in Chicago revealed that the CIA brings drugs into Chicago and other cities by the plane load. They sell these drugs to street gangs who destroy our cities. A lot of heroin on the streets comes from Afghanistan courtesy of the Defense Department and the people who think they own the U.S. government.

U.S. Marine Corps Sgt. Noel Rodriguez, a team leader with Alpha Company, 1st Battalion, 7th Marine Regiment, Regimental Combat Team 6, communicates with an adjacent squad while on patrol in Sangin, Helmand province, Afghanistan, May 1, 2012. Marines patrolled to provide security in the area and interact with the local populace. Notice he is standing in the middle of a poppy field. Those poppy fields are the reason why the Banker Occupied US government wants us to stay in Afghanistan beyond 2014. 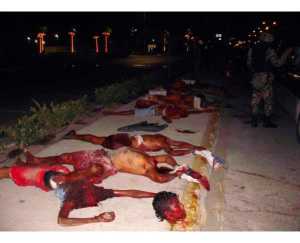 Banks have the right to create money out of nothing and to charge us interest. That transfers wealth from Gentiles to Jews. That is good for all Jews because Jewish Power is supposed to trickle down from the top to the bottom. Compounding interest on money created from nothing leads to Unpayable Debts. This is the cause of Depressions. Depressions are periods in our history when Debts are cancelled. There are three ways out of a Depression. One is Hyperinflation as in the Weimar Republic.

The second way of cancelling Debt is what happened from 1929-1939 in America. Declare bankruptcy. Shut down factories and businesses. Lay off workers. Foreclose on farm loans and mortgages. Contract the money supply. This lead to more than 7 million Americans disappearing from society. At least 3 million Americans (out of a total population of 125 million) starved to death according to the Soviet demographer Borisov. Americans live much further away from farms today than 80 years ago so I would expect a higher death rate during the next Depression. America’s population of 310 million might lose 10 million from starvation or one in thirty. I recently wrote about what you might expect to happen if 30,000 people within 50 miles of your house starve to death. Or maybe 100,000 within 100 miles. What do you think would happen to America after 10 million Americans starved to death and looked like these children? 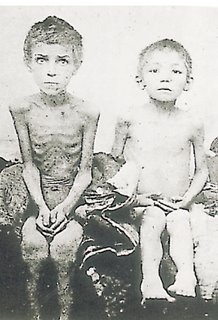 It is clear to me that we are all Palestinians in the eyes of Israel. So why do we allow people like Alan Greenspan, Ben Bernanke, Janet Yellen and Max Fischer run our banking system? Are there no qualified Gentiles anywhere? Why can’t we talk about the millions of Americans who starved to death in the 1930s? Why aren’t we allowed to talk in the Media about Debt Cancellation and Monetary Reform as the only practical alternative solution to tens of thousands of people near your house dying from starvation?

But to do that we would have to confront Jewish Power in the Banks, the Media, in the Universities, the Government, the Entertainment Industry and in Organized Crime .

Remember this: The first step to solving our present crisis is to talk about Jewish Power because they act as if they owned your government. Why else would Israel have killed President Kennedy and taken down World Trade Center Towers 1, 2 and 7 with controlled demolitions if they had no fear of the consequences? Let me close by repeating my opening line:

Jewish Power is the ability to get us to stop talking about Jewish Power. Gilad Atzmon.

Quotes About Jews You Will Never Hear In Schools

Israel Shahak: The Laws Against Non-Jews In 2 Minutes

Video: Jews And The African Slave Trade. It Did Not End In 1832

How And Why An American Military Coup Could Save The World

I have decided to share two of the visions I had as a child. When I was eight, I had a vision of a future war that killed 99.5% of the world's population. When I was 16 and living in the projects, I had a vision of my future. I was to live in complete obscurity until it came time to stop WW III. When I was about ten, I had read a bio of Nikita Khrushchev which said he survived Stalin by playing the bumbling fool an old Russian peasant trick. I decided to do the same as I had already learned that we did not live in a democracy. The other vision I had when I was in third grade was of the Mind of God and how it interacted in the creation of the world we see. I believe you and I were born at this time precisely so we would have an opportunity to stop this war. As for my personal info, I grew up on military bases and in housing projects. My legs atrophied from starvation as a child. My second step-father died in prison. I used to have to rub my skin to simulate human contact. They did not feed me when I was a child. I do not fight in their wars as an adult.
View all posts by horse237 →
This entry was posted in Israel and tagged Israel, Jews. Bookmark the permalink.