The Bloomie-Hillary Ticket And Other Liberal Jokes

Rumor is that  “Mini Mike” and “Crooked Hillary” might join forces. Bad idea Mike. You might get a clue when your life insurance agent calls you two days before the Democratic convention in Milwaukee and says, “If Hillary is your Veep, my company will have to raise your life premiums 10,000%. Some at the home office want to raise it even more because there is slight chance you might become President. Just not much of a chance you live out the first 90 days.” 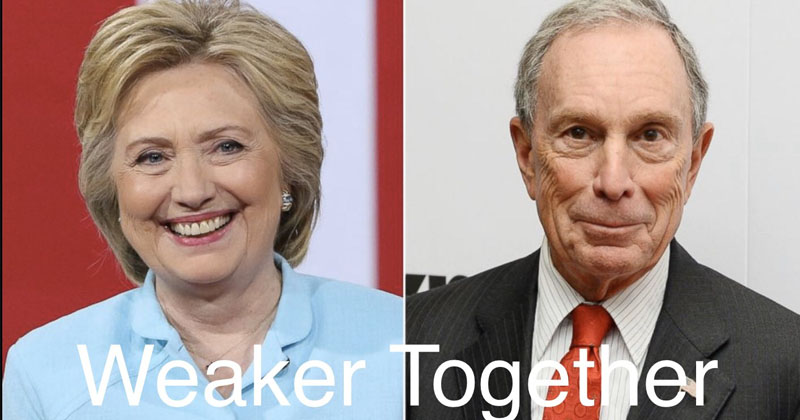 Crooked Hillary has a boat load of people who despise her and know for a fact she will start writing her speech for Bloomberg’s funeral in the morning after her nomination for Vice-President.

Those “Lock her up chants” originated with angry Bernie supporters at the 2016 Democratic Convention in Philadelphia. Now the DNC is conspiring with Bloomberg, the Buttigieg campaign and the Corporate Media to rob Bernie of the nomination in 2020. They refused to release the Des Moises Iowa poll before the caucus because Bernie was winning. The Iowa Democrats did all sorts of bad mad math, rounding errors and multiplication mistakes that would have earned an F back when I was in 5th grade. Then The DNC got involved because the magic app which they insisted Iowa Democrats use, did not work.  Jimmy Dore caught the DNC stealing Bernie votes and giving them to Buttigieg.

Rob Bernie of that nomination again and the best you could do is find a Bernie clone, give him $50 million and run him on a Socialist ticket. At least the Bernie voters will show up to vote in November and save the political lives of Democrat governors, senators and congressmen further down the ballot.

Bloomie’s other dream ticket is Buttigieg for Veep. Bad idea. Mayor Buttigieg fired the first black police chief of South Bend. He followed through by firing the first black fire chief.  He has zero percent black support. And crime surged. The number of aggravated assaults tripled in 8 years.

And he has a cruel streak. As mayor, he wanted to dispossess the homeless. What he did was wait until the homeless had gone to a Mission that fed breakfast to the poor. Then he sent a city crew in to destroy every possession the homeless had which included their blankets and warm weather gear. If a Republican had done that, we would have heard about it. That is a problem for Democrats. They won’t vet candidates to weed out the bad ones before receiving the nomination. There is a video below of Mayor Pete’s gang stealing the blankets from the homeless when it was 12 degrees below freezing.

Even gays in California booed Buttigieg. Seems he was a Naval Intelligence officer in a unit that worked closely with the CIA. The US had 4 CIA connected Presidents from 1989 to January 2017. No reason to think a fifth CIA Yes man will be any different.

As I said, Buttigieg’s black support is near zero. Bloomie can expect the same when blacks hear that viral racist rant he made at Aspen in 2015 in support of Stop and Frisk. His support against Trump will drop to 3% if he is lucky. All the Donald has to do is play his Superbowl ad of the 61-year-old black woman he released from life imprisonment for a non-violent drug offense. Maybe play it often enough so every black person sees it 3 times and hears Bloomie’s racist rant 10 times. Live by Identity politics. Die by Identity politics.

The wild card in 2020 is the Wuhan corona virus. If Bloomie wins the election, and Hillary succeeds him, imagine all the Pay for Play graft the Clinton Foundation will get. Now imagine Hillary after the CDC finds a cure for the Wuhan virus. She can easily get $10 million each from billionaires  to cure their families . She might even cure the maids, butlers, nannies and chauffeurs of billionaires at that price. The cure might be widely available for billions of people. Who better than Hillary to determine who lives and who dies in those first few months while we wait for th cure?

The bloom has come off Senator Amy Klobuchar. Somebody at Telemundo asked her if she even knew who the President of Mexico was.  She did not. She was grilled by two different news reporters about her dismal track record as a prosecutor. Seemed she might have railroaded black teenagers for murders they didn’t commit. One black woman said she was a prosecutor and saw a video of a detective offering $500 for anyone willing to name a suspect. The black former prosecutor said she would have passed on evidence of that sort but Klobuchar used it in court to convict a juvenile of murder.

Bloomberg has a well known history of insulting women and creating a hostile work environment for women. Even Donna Brazile, the Hillary ally, was deeply disturbed by his brash New York Jew style of comments. For example, Blooomie said of the royal family “”The Royal Family – what a bunch of misfits – a gay, an architect, that horsey faced lesbian, and a man who gave up Koo Stark for some fat broad.”

Bloomberg does billions of dollars a year in business with China. He helps US businessmen trade the enormous sums of cash they get working with China. The annual value of this trade is billions and he makes more from it than Trump earned in his whole life. Bloomberg is not just rich, he is the 9th richest man in the world. And he made billions sending US jobs to China. He is a committed Globalist who cannot be motivated to care about working class Americans.

So apart from Bernie the Democrats have no candidate. Project Veritas did a lot of interviews with Bernie field workers who talked about sending Trump voters to Soviet style re-education camps. Bernie did not fire one of those morons. Nor did any of Bernie’s rivals for the nomination think it was worthy of debate. Now there is a Democrat running for Senator in Maine who chose the guillotine as the symbol of the job Democrats must do after the elections. What’s the Democrat campaign theme? “Off with their heads.”

The Democrats have a dismal field. Too many racists. Not good in a party dedicated to tricking black people into thinking they are their best friend. Who did blacks think was responsible for destroying the black family by running the black illegitimacy rate up from 10% to 77%.

They have a candidate who could win but Tulsi Gabbard would put the DC Swamp Creatures in jail so they Deep Sixed her as quickly as they could.

American political parties don’t last forever. If the Democrats self-destruct over corruption and betrayal of working people, a new party will rise up very quickly to replace them.

There is no Global Warming. We are entering a cooling period. If we don’t reverse course, we will jeopardize the food sources of billions of people.

2020s: Surviving The Cold, The Quakes And Volcanoes

Gerald Celente said, “America is the first Undeveloping country of the 21st century.” America’s infrastructure deficit is around $4 trillion. If we don’t stop having foreign wars and seize the Federal Reserve Bank, we will no longer be a viable modern nation. See this:

Iran Waits With Mach 14 Missiles While The US Collapses

I have met working people who suffer from the illusion that Democrats want to help the poor. The Democrats want to lower their wages and to raise their rents. 1 in 4 renters pays over half of their income in rent. Why? Democrats flood the US with illegal and legal aliens. Might I point out that the population of Mexico in 1950 was 28 million. Today there are 34 million Mexican Americans and 132 million people in Mexico. Solving the over population problems of Latin America, Africa, the Mideast and Asia is way beyond our ability.

Senator, Why Do You Want to Cut Our Wages and Pensions 50%?

This is that video that shows Mayor Pete’s crew evicting the homeless, stealing their blankets and warm weather gear so they can freeze at 16 degrees Fahrenheit (-9 Celsius) in the middle of winter. He does not care about the poor.

I have decided to share two of the visions I had as a child. When I was eight, I had a vision of a future war that killed 99.5% of the world's population. When I was 16 and living in the projects, I had a vision of my future. I was to live in complete obscurity until it came time to stop WW III. When I was about ten, I had read a bio of Nikita Khrushchev which said he survived Stalin by playing the bumbling fool an old Russian peasant trick. I decided to do the same as I had already learned that we did not live in a democracy. The other vision I had when I was in third grade was of the Mind of God and how it interacted in the creation of the world we see. I believe you and I were born at this time precisely so we would have an opportunity to stop this war. As for my personal info, I grew up on military bases and in housing projects. My legs atrophied from starvation as a child. My second step-father died in prison. I used to have to rub my skin to simulate human contact. They did not feed me when I was a child. I do not fight in their wars as an adult.
View all posts by horse237 →
This entry was posted in Politics and tagged jews and gentiles, politics. Bookmark the permalink.

2 Responses to The Bloomie-Hillary Ticket And Other Liberal Jokes