Just How Bad Will This Depression Get?

3 million Americans starved to death in the 1930s according to the demographer Borisov. There were only 123 million Americans in 1929. They did not have to die. Eight professors from the University of Chicago gave FDR a plan that would have ended the Depression in 90 days. It was basically Dr Irving Fisher’s theory of 100% money.

If we had a non-interest bearing currency, we would not have a $27 trillion debt and be paying over half a trillion dollars a year in interest. Nor would we have an infrastructure deficit of bridges, sewers, schools and roads needing repair. We could pay for all that and create lots of high paying jobs by spending money on roads and schools.

The second part of 100% money is to repeal fractional reserve banking. That would have ended the Depression. Under our system of debt based fractional reserve banking, no checking account money can be issued until someone comes into a bank and borrows money at interest. Bankers create checking account money when they issue $100 in loans for every $10 on deposit.

Who in his right mind would borrow money at interest in 1933 America?

Only the federal government could borrow money at interest to replace the money that had been cancelled when loans were either repaid or discharged in bankruptcy court or foreclosure.

Under 100% money even checking account money is created by the Treasury so currency
would not contract in bankruptcy or when it is repaid.

In 1933 America our money supply contracted 31% with no way to increase it so we would have sufficient money to conduct business. But a 100% money supply eliminates money contraction and also bank runs. And it does away with most Bubbles because loans create demand. Under 100% money, the money already exists and loans only shift from one sector to another.

So what happens next? A Depression is a period in time when Unpayable Debts are cancelled en masse. Since we have more Unpayable Debts than anytime in history, we are headed to the worst Financial disaster in 500 years. That would mean more starvation than in the 1930s unless we change things now. We have a population of 331 million which is 202 million more than in 1929. There is a famous Deagel forecast that in 2025 our US population will be reduced. The following is from Google:

Well as we see now in the screenshot above taken from their website page for the United States this morning, Deagel is now forecasting that the 2025 population of the USA will be a nice, round 100 million people – nearly doubling their previous 2025 forecast for America of 54 million. Apr 10, 2020.

The solution is obvious: We need to get rid of interest bearing currencies and fractional reserve banking. If we don’t, I would expect tens of millions of Americans to starve to death. We have 202 million more people than in 1929. And today people live in big cities far from food whether it be gardens, chickens in the backyard or an occasional deer or rabbit near your house. But, city dwellers won’t peaceably starve to death in 2021 or 2022. Will they? The Guardian tells us that Americans own 493 million guns. We could reasonably expect every city in America to burn to the ground. At what cost?

And now we can ask why we have this very bad monetary and banking system designed to transfer wealth from those who make wealth to those who create money out of thin air at a cost of their fellow citizens dying from either violence or starvation. The men who created this banking system were agents of the Rothschilds, the Rockefellers, J P Morgan and the Warburgs. Hint: The last three were partners of the the first.

So the question is this: are the lives of 7 billion people equal in value to those of the 30 Families and their 6,000 Minions? Those are our rulers according to David Rothkopf in his book Superclass who used to be CEO of Kissinger  Associates, a major Minion of the Darkside. This is point where I tell you I have a photo of Marina Abramovic, Satanist and performance artist, together with Lord Jacob Rothschild in front of the painting entitled Summoning Satan. 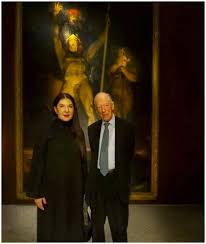 I have written of how violence or warfare could be waged against us using a vaccine and a bioweapon.

Dr Mikovits: Vaccine Could Kill Tens of Millions in America

Alternatively, we could organize a peaceful Debt Cancellation just as they did in ancient Sumer and Babylon 4,400 years ago.

Matt Lauer made $25 million a year reading the morning news. He had perks. He demanded a button be placed on his desk so that he could electronically lock Gentile women inside his office. Matt Lauer raped women so badly that ambulances had to be called to his NBC office. But that was before The MeToo# Movement.

Whopping Tales Of The Mainstream

I have decided to share two of the visions I had as a child. When I was eight, I had a vision of a future war that killed 99.5% of the world's population. When I was 16 and living in the projects, I had a vision of my future. I was to live in complete obscurity until it came time to stop WW III. When I was about ten, I had read a bio of Nikita Khrushchev which said he survived Stalin by playing the bumbling fool an old Russian peasant trick. I decided to do the same as I had already learned that we did not live in a democracy. The other vision I had when I was in third grade was of the Mind of God and how it interacted in the creation of the world we see. I believe you and I were born at this time precisely so we would have an opportunity to stop this war. As for my personal info, I grew up on military bases and in housing projects. My legs atrophied from starvation as a child. My second step-father died in prison. I used to have to rub my skin to simulate human contact. They did not feed me when I was a child. I do not fight in their wars as an adult.
View all posts by horse237 →
This entry was posted in Debt Cancellation and tagged Debt Cancellation, jews and gentiles, Starvation. Bookmark the permalink.

14 Responses to Just How Bad Will This Depression Get?