Since there is no great die off in America today we might ask ourselves how 233 million Americans will either die or flee the country in terror over the 48 months from Christmas 2021 to the end of 2025. That would be 4.854 million people either dying or fleeing every month for 48 moths with obviously some months being far worse than others.

Good News: I was in high school when we still had a Cold War. I told everyone in class that: 1) There would be no nuclear war because nuclear weapons killed rich people. 2) We shouldn’t worry about the Cold War because both sides have the same Bankers.

Bad News: I also told the class that rich people like starvation as a weapon because it is cheap and gets rid of those pesky poor folk. My original estimate when I was 15 years-old was that from 2 to 3 million Americans starved to death during the Great Depression. We now know that the real figure is at least 3 million Americans, if not more, starved to death to make the world a better place for billionaires.

My first candidate for the coming mass die off would be covid, the vaccines and other bioweapons. Covid was made in a lab at the University of North Carolina. Dr Fauci sent money from NIH to a Chinese military lab at Wuhan to make the virus more contagious and more deadly. The money was laundered through the EcoHealth Alliance of New York which is a military contractor and received $39 million in grants from the Pentagon. Instead of blaming the Chinese, I would prefer to begin arresting war criminals in the US starting with Dr Anthony Fauci.

Magnetism has been added to mRNA Pfizer and Moderna vaccines to spread the messenger RNA throughout the body. Normally vaccines concentrate themselves near the injection site. Dr Jane Ruby explained to us that this process is called magnetofection which is a transfection method that uses magnetic fields to concentrate particles containing nucleic acid into the target cells. The problem is that spike proteins thus wreak havoc throughout the human body. Miscarriages are up 336% in the UK. Young men around the world are developing blood clots.

Superparamagnetic iron oxide nanoparticles (SPIONs) are beyond the scope of this brief article but you can dive deeper at Wikipedia or at PubMed.

Graphene Oxide has been detected in the mRNA injections. It is a poison. And a British doctor has taken photos of recently vaccinated patients. These is a comparison photos between vaxxed and unvaxxed blood. 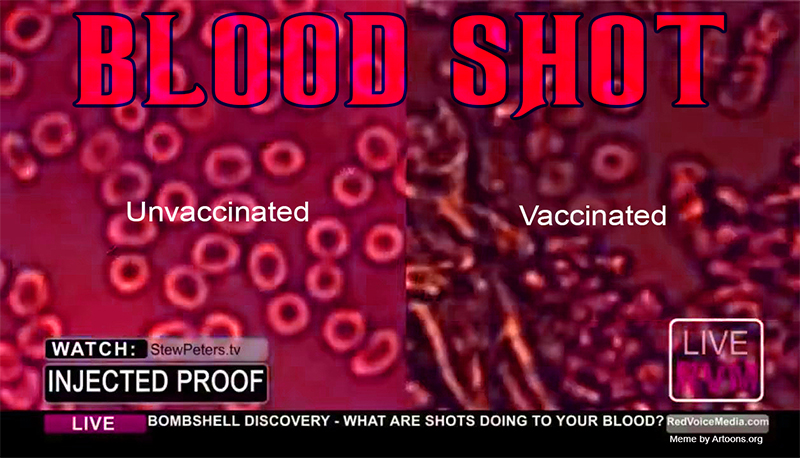 Waiting in the wings would be another coronavirus – Middle East Respiratory Syndrome (MERS) which could be weaponized to give us an at least 35% death rate amongst the vaxxed. This according to the British government’s Scientific Advisory Group on Emergencies (SAGE.)

Dr Mikovits told us that 20 million Americans carry a mouse retrovirus which they got from either vaccines or blood transfusions. This retrovirus is XMRV ( Xenotropic Murine Leukemia-Related Virus.) Xenotropic just means the virus came from a non-human source. The word murine is just a scientific way of saying mouse. It can cause cancer and has been linked both to autism and to chronic fatigue syndrome which were unknown before we started injecting animal diseases into humans via vaccines designed to make Big Pharma wealthy.  She also said that covid and the covid experimental injections  can interact with XMRV to kill millions of us.

The mRNA injections will also kill or maim people exposed to GMO, Pesticides and Glyphosate.  Chemical giants DuPont and Daikin lied to the U.S. Food and Drug Administration (FDA) when they told agency officials certain types of “forever chemicals” used in food packaging were safer and less likely to accumulate in humans than older versions of the chemicals. the companies deliberately concealed the negative health effects of fluorotelomer alcohol, or 6:2 FTOH, a type of “short-chain” per- and polyfluoroalkyl (PFAS) chemicals used in pizza boxes, to-go containers and fast-food wrappers. The chemicals have been linked to numerous health issues including kidney disease, liver damage, cancer, neurological damage, developmental problems and autoimmune disorders. In the UK one hundred women who were breast feeding had these forever chemicals in their milk. And we wonder why public health is deteriorating. Catherine Austin Fitts said she noticed how much healthier people were in foreign countries when she began speaking publicly in foreign countries.

So covid, the mRNA jabs, environmental toxins and previous vaccines could combine to kill us but not at the nearly 5 million a month level. Dr Lee Merritt has said someone at the top has declared war on us. She also said that the mRNA injections are not vaccines. But they are binary weapons. She said two years after the mRNA bioweapons were injected into us that a second bioweapon could be released that will cause a mass level death event for humans. Spring or Fall of 2023 would be a good time release that binary bioweapon though unrest in the streets could scare the Bankers of New York and London into acting prematurely.

Another source of mass death would be the coming economic collapse. America was proven by Wassily Leontieff to be wealthier than Europe because we had skilled labor and added value to our natural resources. That was true until 1950 when America’s population passed 150 million and we had to start importing natural resources. Normally, we would have to cut wages to accommodate the legal and illegal aliens.  But America prints the world’s most popular reserve currency which allowed our politicians to print trillions of dollars in I Owe You Nothing Federal Reserve Notes to exchange things foreigners made for worthless pieces of paper.

In addition to flooding the country by Opening our Borders, the Deep State Democrats are planning to run a $3 trillion deficit for 2021 and probably more for 2022. They cannot do that for too many more years. Some countries have already dumped the dollar completely and others only partially. One day in a year or two or three the Dollar will no longer be a reserve currency so if you want to buy a car or electronics or clothes from overseas, you would have to buy 2 gold coins for $20,000 or so to get a letter of credit. That is the day wages and pensions are cut and the day before the Nationwide Food Riots begin and every big city in America is burned to the ground. I would expect 30 million Americans to die from starvation, suicide and violence. That would be less than 1/7th of the total of the 233 million Deagel expects to die.

Zero Hedge ran an article saying that the Biden admin (meaning his masters, Soros, Gates, Zuckerberg, et al) want to replace Powell as FED chair with someone who would be willing to print even more money than they are currently! Instant Hyperinflation if they do that. A dumping of the dollar by foreigners if they even attempt to do that. Any move by foreigners to dump dollars to protect themselves would permanently cut wages and pensions 60%.

My regular readers know that I had a vision when I was  8 years-old which guided my life. That vision revealed that well over half of the world’s  population would die at some point when I was older. When I was 9, I learned the difference between interest bearing and non-interest bearing currencies.  I concluded that the Wall Street elite were criminals who robbed us. In recent years I have concluded that the Bankers have robbed us of tens of trillions and would rather kill a few billion people than make restitution.

Update: I have been keeping tabs of the new revelations regarding the Covid Vaxx Bioweapon. The US military has reported that the cancer rate for vaxxed personnel is up 300%. An embalmer has found 2 foot long clots in corpses. And Dr Jane Ruby has found that certain batches of covid vaxxes from Moderna, Pfizer and Johnson and Johnson produce most of the deaths and disabilities. Some batches skew towards killing its victims and others seem designed to disable us for life. https://vidrebel.wordpress.com/2021/09/07/covid-truths/

AN APPEAL: We can stop this covid nonsense in 72 hours. If you can, please forward the following message to someone with the resources to do it. Go to the VAERS database which lists adverse reactions to covid jabs. We know that the bad batches are designed to either maim or kill people in Republican states. What we need is for someone to go into details at the county level. https://vaers.hhs.gov/data.html What we want to do is to get data for a city like San Francisco and compare it to Iowa or Tennessee. And then ask people in those states if the people of San Francisco are ten times better than the people of Iowa or Tennessee. Another area with low adverse numbers would be the DC federal employees who live in the Virginia and Maryland suburbs. They have been vaxxed twice and boosted and are not dropping dead. Ask people of Ohio and Michigan if DC Swamp Creatures are 10 times better people than they are. Please get this message to as many influential people with crusading websites as possible. Thanks.

Tens of trillions that went missing from government funds. I also mentioned the fact that the Bankers are allowed to sell trillions in US Treasury bonds pocketing the cash and sticking us with the bill for the principal and the interest. Read more here: https://vidrebel.wordpress.com/2020/06/23/10-trillion-here-10-trillion-there/

Wall Street Bankers allowed Israel to attack the World Trade Center Towers and the Pentagon on 9-11-2001. This issue needs to be kept in the public’s awareness. Barbara Honegger And The Pentagon Attack Papers https://vidrebel.wordpress.com/2021/05/17/barbara-honegger-and-the-pentagon-attack-papers/

Wall Street deliberately over populated knowing that they would lower American wages from $20 an hour to $8 an hour. Deep State Democrats To Cut Wages 60%. Then It Gets Worse https://vidrebel.wordpress.com/2021/03/30/deep-state-democrats-to-cut-wages-60-then-it-gets-worse/

Retrovirus From Vaccines Can Be Triggered By Glyphosate, Pesticides

This video reveals the truth about magnetism and the mRNA vaccines. https://www.bitchute.com/video/EvmXRS5tYC1Q/

I have decided to share two of the visions I had as a child. When I was eight, I had a vision of a future war that killed 99.5% of the world's population. When I was 16 and living in the projects, I had a vision of my future. I was to live in complete obscurity until it came time to stop WW III. When I was about ten, I had read a bio of Nikita Khrushchev which said he survived Stalin by playing the bumbling fool an old Russian peasant trick. I decided to do the same as I had already learned that we did not live in a democracy. The other vision I had when I was in third grade was of the Mind of God and how it interacted in the creation of the world we see. I believe you and I were born at this time precisely so we would have an opportunity to stop this war. As for my personal info, I grew up on military bases and in housing projects. My legs atrophied from starvation as a child. My second step-father died in prison. I used to have to rub my skin to simulate human contact. They did not feed me when I was a child. I do not fight in their wars as an adult.
View all posts by horse237 →
This entry was posted in Bioweapons. Bookmark the permalink.