Rothschilds And Friends To Scuttle The Dollar

President Macron, a former partner specializing in acquisitions at Rothschild & Cie Banque making a million euros a year, attended a conference in Baghdad on the weekend of August 28th. 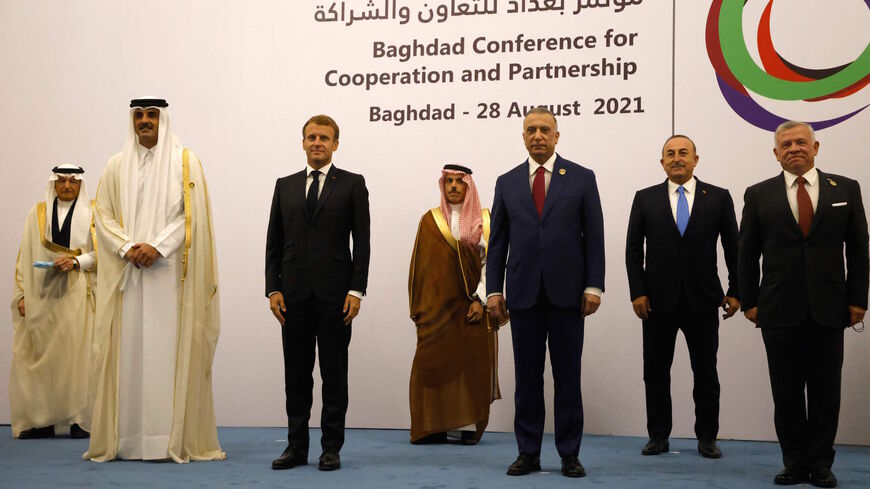 The above list includes former major US Allies in the region but times are changing. Qatar helped take down the Libyan government after Qaddafi threatened to free the Africans from American dollar hegemony by offering them a gold and oil backed currency.  Saudi Arabia helped Bush I take down Saddam Hussein, who made the mistake of trying to sell oil for euros. Turkey is supposed to be an ally through NATO of the US. Al Sissi is supposed to be an American ally in the War on Terror but he has an uncle who served in the Israeli Knesset as a Labour MK. so he is Jewish.

One observer opined that the group is plotting the end to the Petrodollar. The US took over the status of the British pound as world reserve currency when the Rothschild family still owned the Bank of England. The US Empire replaced the British. The replacement for the American Empire will be the New World Order which requires that America be reduced to an impoverished, weakened state. And that is a sacrifice the Rothschilds are willing to make.

The US has run perpetual trade deficits ever since Wall Street decided to over populate America and to use Identity politics to divide and conquer their enemy which would be Americans who were addicted to freedom and democracy. Wassily Leontieff, who won a Nobel prize in economics, did an input-output study of the American economy back in the 1930s. He discovered that the outputs of America’s natural resources, such as,  iron, coal, oil, fibers and food  were used to produce the steel, aluminum, plastics and fabrics that became the inputs that made bridges, cars, washing machines, and clothes. American workers made more money than their European counterparts because they used skilled labor to add value to abundant natural resources. The fly in the ointment was that when America’s population went over 150 million, she had to import raw materials for the first time.

That is when America was supposed to cut wages and raise rents until she could compete with cheap foreign labor. As an alternative, Henry Kissinger, another Rothschild agent, developed the Petrodollar. The Saudis agreed to pay exorbitant prices for American military equipment, to buy US Treasury bonds, to invest in the NYSE and to more importantly only sell oil for US dollars. That would create an artificial demand for dollars and take care of America’s budget deficits as well. Germany could sell cars to earn dollars to buy oil but what could America sell except for weapons and wheat?

Recent wars have revealed that the Russians make far superior jets, tanks and missiles. And the collapse of Afghanistan has firmly fixed in the minds of world leaders that America is no longer a trusted ally. The Petrodollar was the last prop keeping America afloat. The US can no longer launch wars against nations that refuse to accept dollars.

So what will replace the US Dollar as a world reserve currency. A key area of world trade would be to arrange to sell oil for a digital currency backed by gold and these oil producing nations and the three nations in the region with large standing armies will be the key to dethroning the Petrodollar.

Joe Biden’s solution to a fall in the purchasing power of the dollar is to print a few trillion dollars more every year plastering the walls with fake money as he sinks the ship of state.

If America can no longer print dollars and buy free stuff from overseas in exchange for worthless paper, the following will happen.

1) No budget deficits. Why would anyone buy a bond that pays a very low rate of return when that bond is losing 10 to 20% of its value every year in relation to other currencies? If you sell US bonds and stocks, you could buy commodities which might be increasing in value at 25% or more a year.

2) The end of the welfare state. No more stimulus checks. No Food Stamps. No child tax credits. Major cuts to Social Security and to education. We could not afford most of our military either. That means we have to do whatever China and Russia want, forever. If China wants to buy our food, we will have to sell it even if Americans have to starve.

3) The Federal Reserve has printed tens of trillions of dollars which have increased stock share prices. No more. American stocks are denominated in dollars. When the Dollar Dies, people will flee the US stock and bond markets. They will sell stocks and bonds and use the money to buy commodities which can be sold for any currency or even traded for gold or silver. What this will do is to raise both commodity prices and interest rates dramatically over night. One day we will wake up and hear that the Dollar Died. The next day we will wake up and see that the price of everything has more than doubled.

4) I have calculated that we would need a permanent 60% paycut in order to balance our trade deficit. The Wall Street Bankers deliberately over populated America by encouraging legal and illegal immigration. They knew that running America’s population from 150 to 333 million would increase the demand for housing. Blackrock’s CEO, Larry Fink, is buying up residential real estate and now even college dormitories. Over population makes rent gouging a great business opportunity. Over population also increases the supply of labor which cuts wages. Instead of gradually cutting wages and raising rents, the FED has been printing I Owe You Nothing Federal Reserve Notes, which Americans used to buy free stuff overseas. The FED by printing tens of trillions of dollars has pushed the Day of Reckoning for over population off into the future. But that Day of Reckoning Will Be Terrible and it is at hand. That is why the Uber Rich are buying private islands and trying to take away our guns.

The Rothschilds will lead the way to the destruction of America. I predicted we will soon have Nationwide Food Riots. And I repeat my earlier prediction that American elections  might not be possible in November of 2024.

Arnold Leese wrote of the relationship of the Jews to China. I reprinted his article here: Arnold Leese: THE JEWISH ROTTING OF CHINA.https://vidrebel.wordpress.com/2013/12/05/arnold-leese-the-jewish-rotting-of-china/

Schools omit the most relevant parts of Jewish history. You might want to look at this:
Quotes About Jews You Will Never Hear In Schools https://vidrebel.wordpress.com/2013/03/23/quotes-about-jews-you-will-never-hear-in-schools/

We Are Not Anti-Semites We Merely Oppose The Psychopathic Religion Judaismhttps://vidrebel.wordpress.com/2011/09/27/we-are-not-anti-semites-we-merely-oppose-the-psychopathic-religion-judaism/

A Sudden Collapse of the Global Deep State Is Possibly Nighhttps://vidrebel.wordpress.com/2021/08/16/a-sudden-collapse-of-the-global-deep-state-is-possibly-nigh/

I have decided to share two of the visions I had as a child. When I was eight, I had a vision of a future war that killed 99.5% of the world's population. When I was 16 and living in the projects, I had a vision of my future. I was to live in complete obscurity until it came time to stop WW III. When I was about ten, I had read a bio of Nikita Khrushchev which said he survived Stalin by playing the bumbling fool an old Russian peasant trick. I decided to do the same as I had already learned that we did not live in a democracy. The other vision I had when I was in third grade was of the Mind of God and how it interacted in the creation of the world we see. I believe you and I were born at this time precisely so we would have an opportunity to stop this war. As for my personal info, I grew up on military bases and in housing projects. My legs atrophied from starvation as a child. My second step-father died in prison. I used to have to rub my skin to simulate human contact. They did not feed me when I was a child. I do not fight in their wars as an adult.
View all posts by horse237 →
This entry was posted in Hyperinflation and tagged food riots, Hyperinflation, jews and gentiles. Bookmark the permalink.

4 Responses to Rothschilds And Friends To Scuttle The Dollar